From the 11th to the 15th February according to this Program.

On 10th February, the different groups travelled to the Airport of Riga, and were accommodated in the corresponding families. Some of them, as they arrived early enough, had the opportunity of visiting the International Ice Sculture festival taking place in Jelgava during these days.

The Main theme of the Meeting was “Origins” 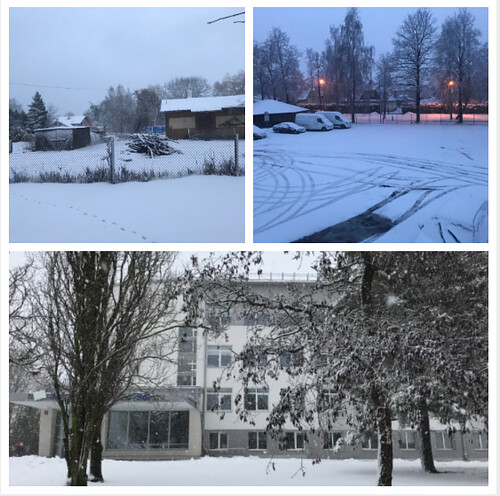 On Monday we had the opportunity to arrive to school, after walking over the iced streets. We performed there some ice breaking activities. The first meeting of the project had started.

We were introduced to the Headmaster there, to the country and also to the town. We could know a bit more about them, about their language and abour their uses.

We had also the opportunity to introduce the different schools. 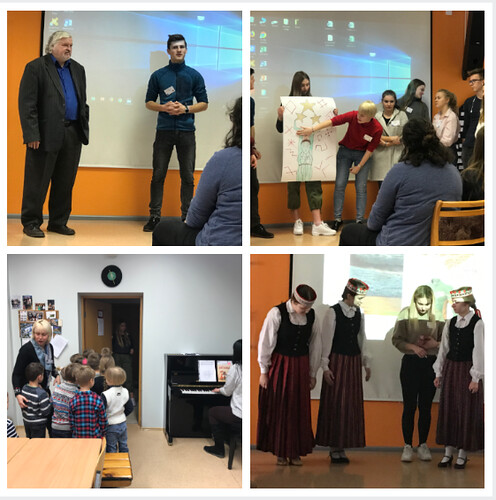 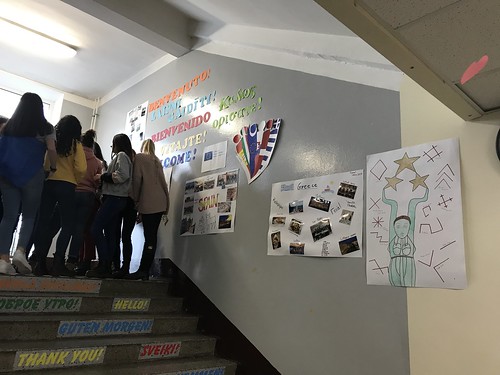 After having some Latvian lessons, and having lunch at school, we could take part in the practical workshop: Creation of the Tree of Languages. Among the five countries, an artistic representation of the tree of languages was created. 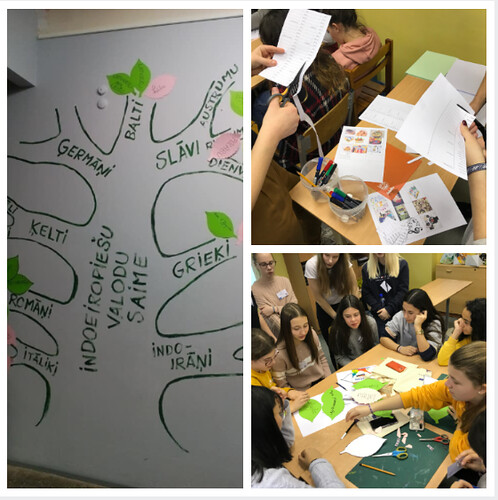 After that, students all together had the opportunity to have a walk around Jelgava. Meanwhile, the teachers had dinner together. 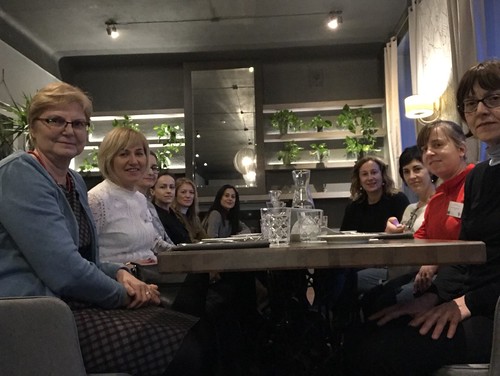 After that, we took a bus to go to the townhall, where we had arranged a meeting with the Mayor of Jelgava. We could learn a bit more about the city, and about what makes it different from other cities. 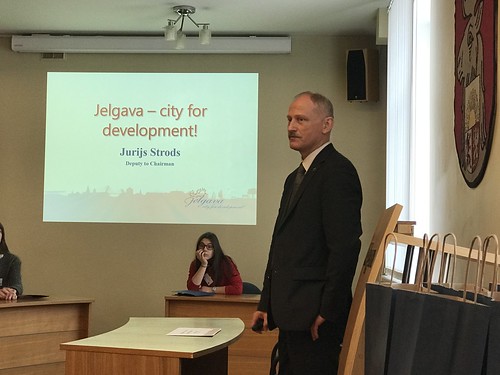 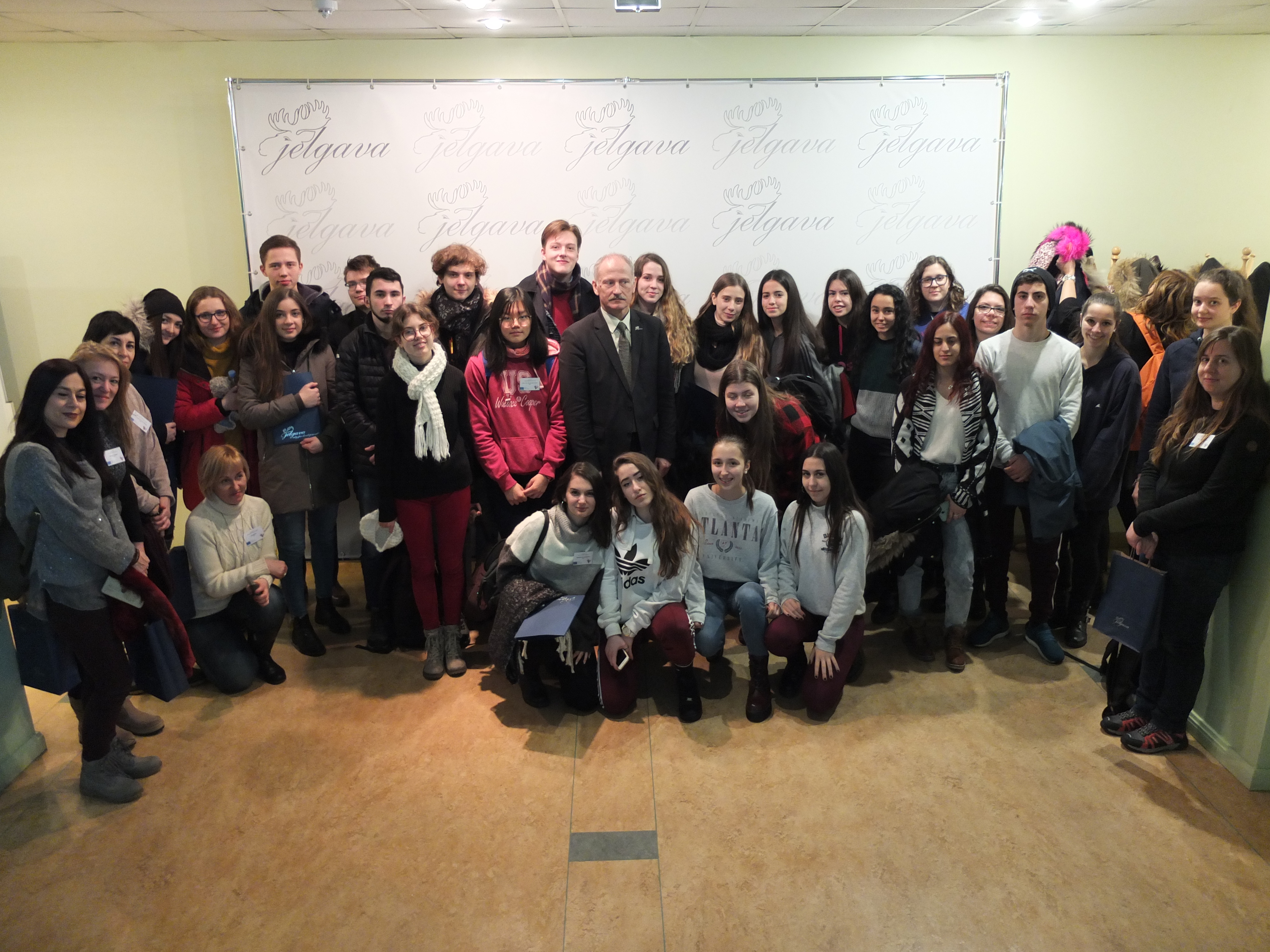 The bus was waiting for us to travel to Rundale Palace, a wonderful palace we could visit with a guided tour. Rundale Palace is one of the two major baroque palaces built for the Dukes of Courland in what is now Latvia, the other being Jelgava Palace. The palace was built in two periods, from 1736 until 1740 and from 1764 until 1768. It is situated at Pilsrundāle, 12 km west of Bauska. 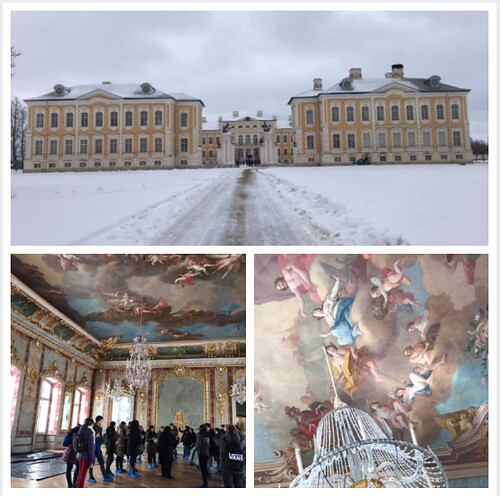 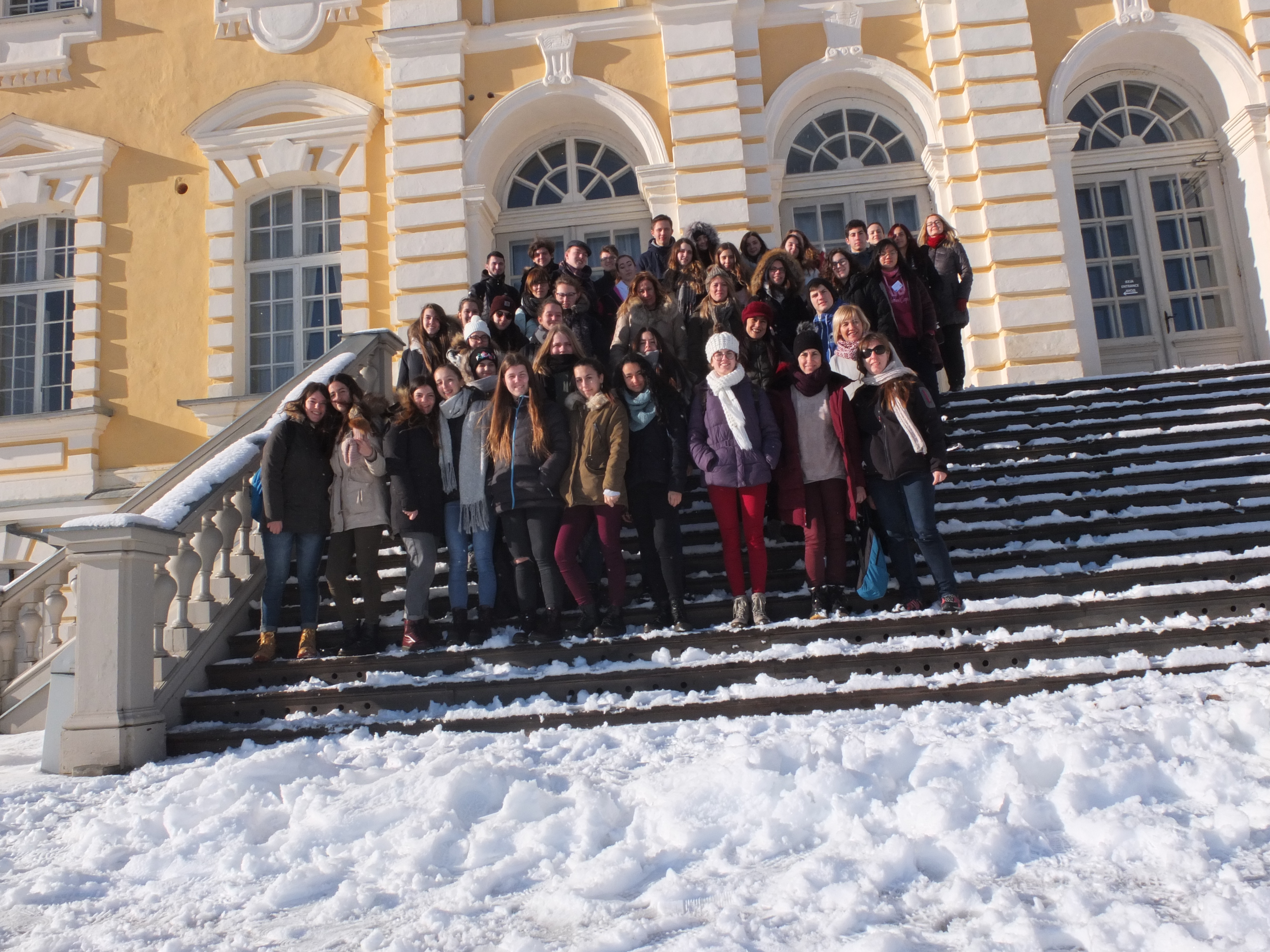 We had lunch close to there, and after that, we travelled to Bauska castle, where, we visited it, but additionally, we learnt about uses of the 16th Century and practice some typical dances of that ages. 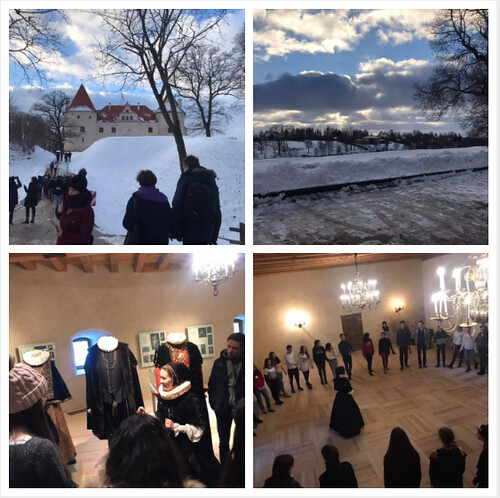 We started the day working about characters important in the origins. After visiting the time line our Latvian partners had created to represent some of these characters, the remaining partners could present theirs.

Again, we went to the arts classes to perform another practical workshop: Creating a glossary. After a coffee break, we had a presentation about the Myths from each country, all of them in different formats.

In the afternoon, after having lunch, we had a presentation about Greek Drama. It was a needed activity to perform another activity in Slovakia: The performance of Antigone, a Greek Drama.

Students, working in groups, had the opportunity to start working on this performance, analysing and summarizing the plot.

To end the day, we assisted to a wonderful concert of the students of the Latvian School.

After school, students dated to go to ice-skate, and teachers had dinner all together.

We started the day working on the workshop of analysing current problems with historic view, where students worked in groups to study different problems with current perspective. After the groupswork, the topic were presented and a final product exhibited to the others.

After presenting the topics, we travelled to Riga. While students had an outdoor activity about Orienteering competition and presentation, teachers had an excursion around Old Riga. 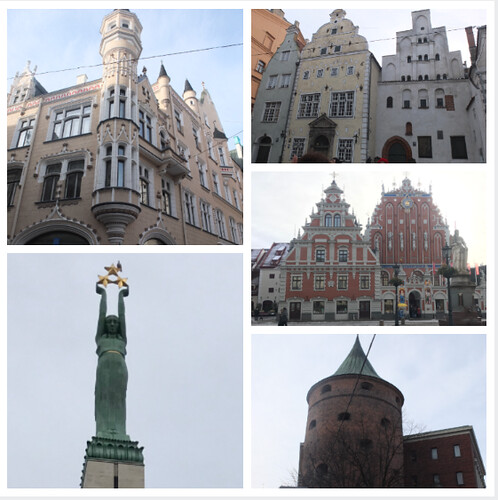 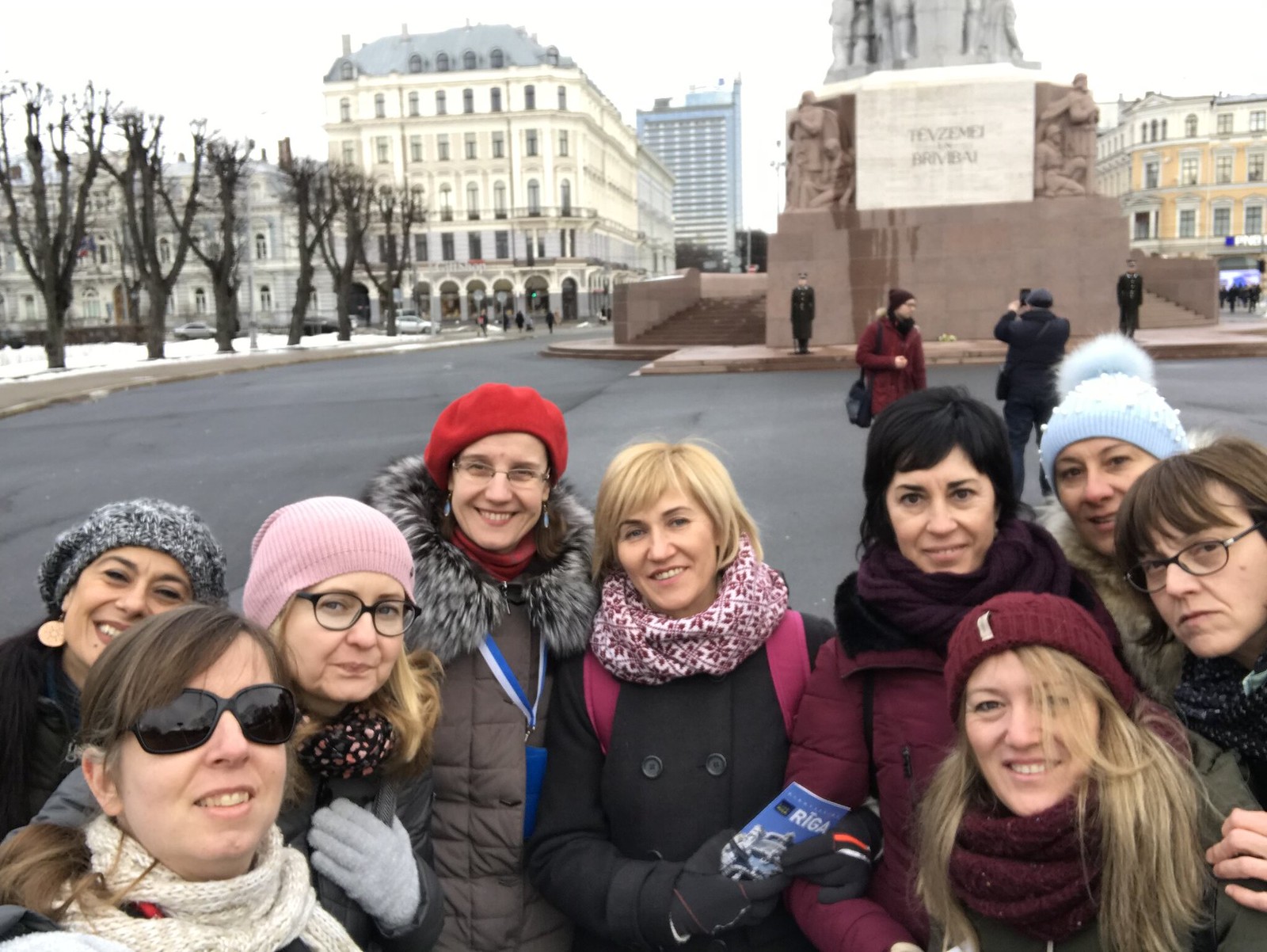 After visiting the most important monuments, we had lunch at Lido and later we went back home. When we arrived to the school, there was a party, and after it, some Sport games were prepared for students. 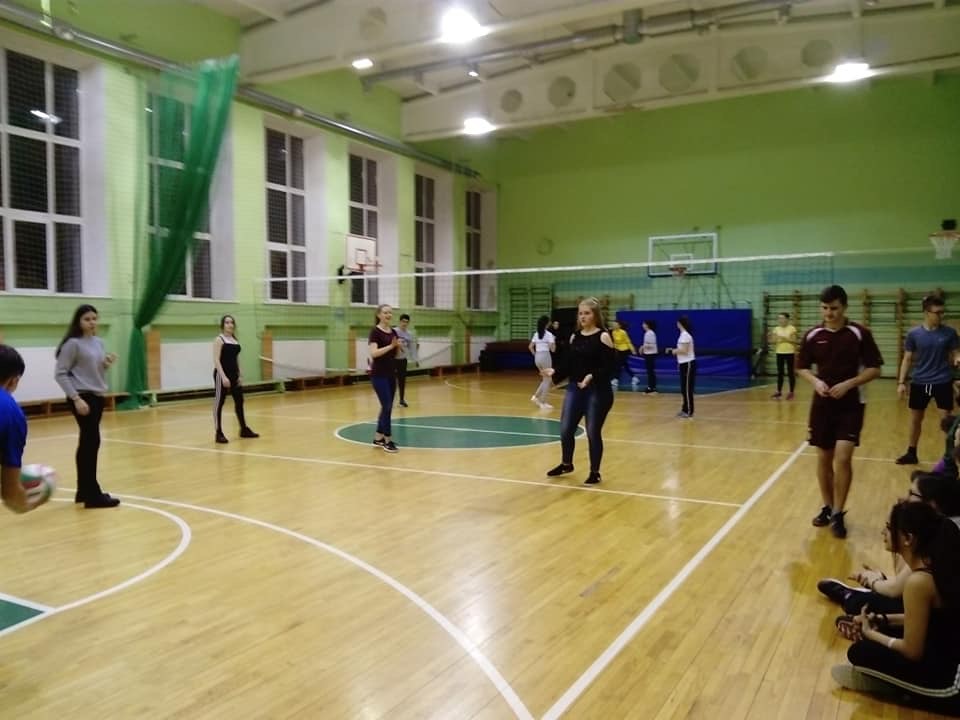 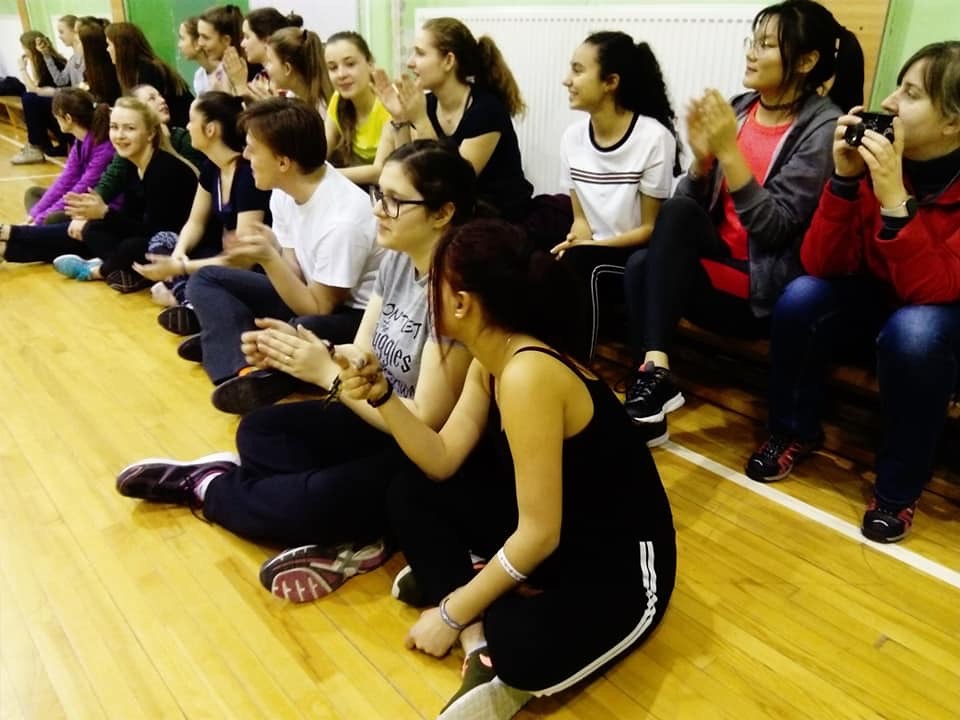 It was the last day of the Meeting, and in the morning, students had the opportunity to visit some lessons with Latvian students, while teachers had a workshop about the use of Genial.ly, a platform allowing to create some nice presentations.

Later, while students took part in the game “Orientation in Jelgava”, teachers had their Teacher’s Meeting, where they shared some informations and prepared the next Meeting. 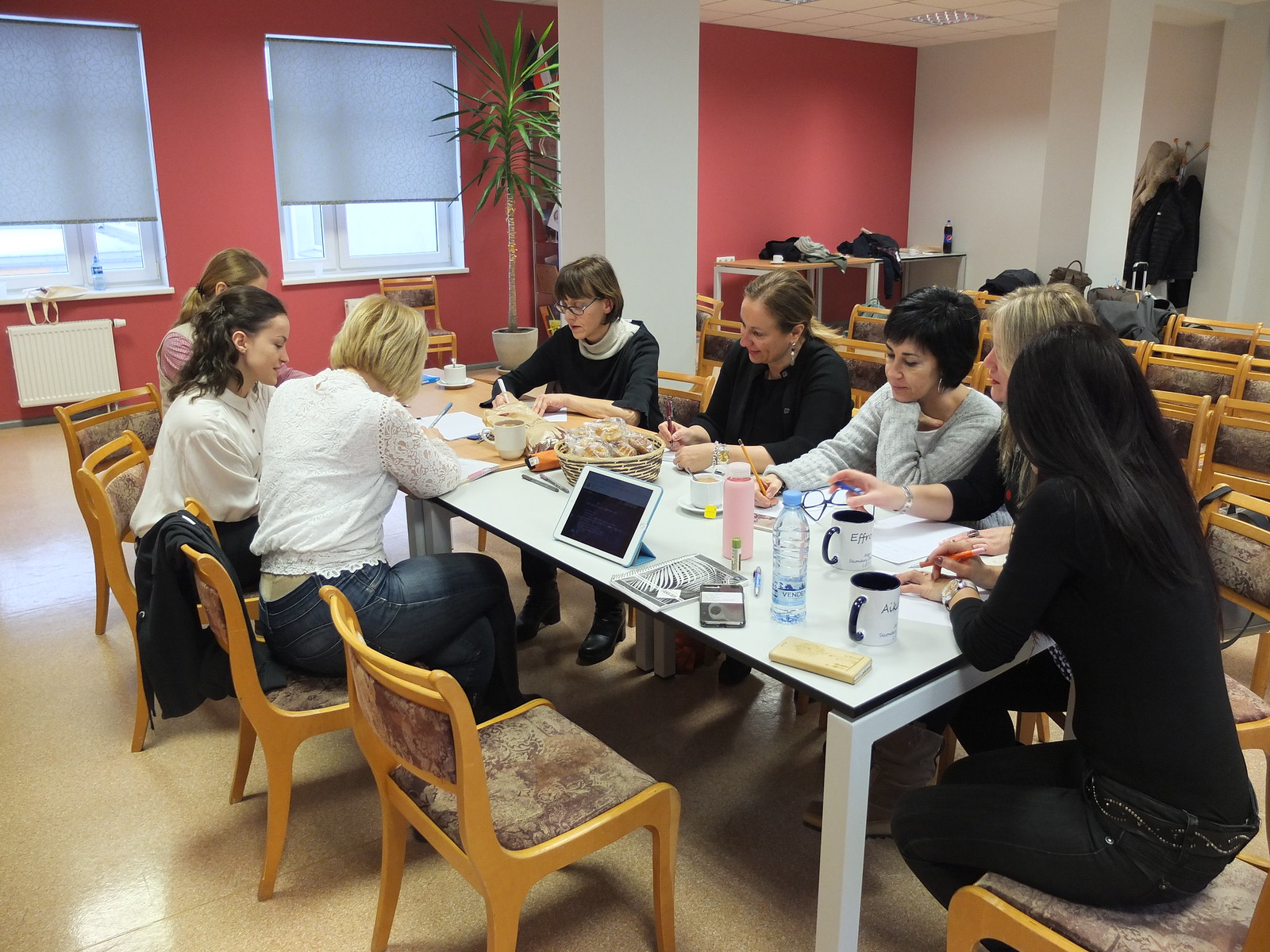 After having lunch, it was time to evaluate the project and have the certificates.

In the evening, the final Goodbye party took place, while teachers had their last dinner all together.

Thank you very much, Iveta and your team for such wonderful days there in Jelgava!