From the 10th to the 14th February 2020 the Fourth Meeting of the project took place in Calatayud according to the following program.

On 9th February, the different groups travelled to Calatayud, and were accommodated in the corresponding families.

The Main thopic of the Meeting was “Cultural and Scientific Legacy”

The meeting properly speaking started on the 10th, with the arrival of the different groups of students to the school. The groups were welcomed by the Headmaster, and Calatayud and the school were presented, explaining some needed informations before the visit to the town organized for the afternoon. 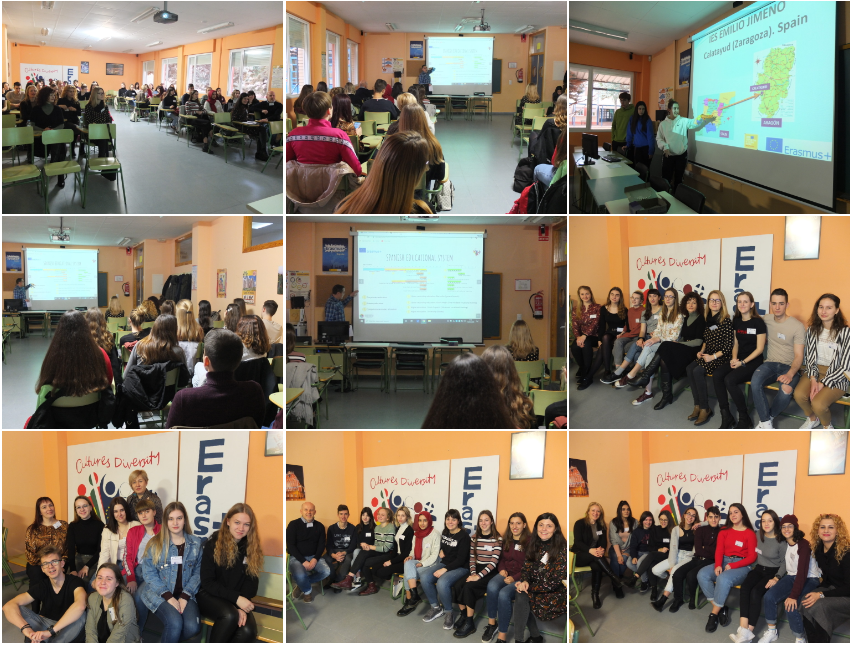 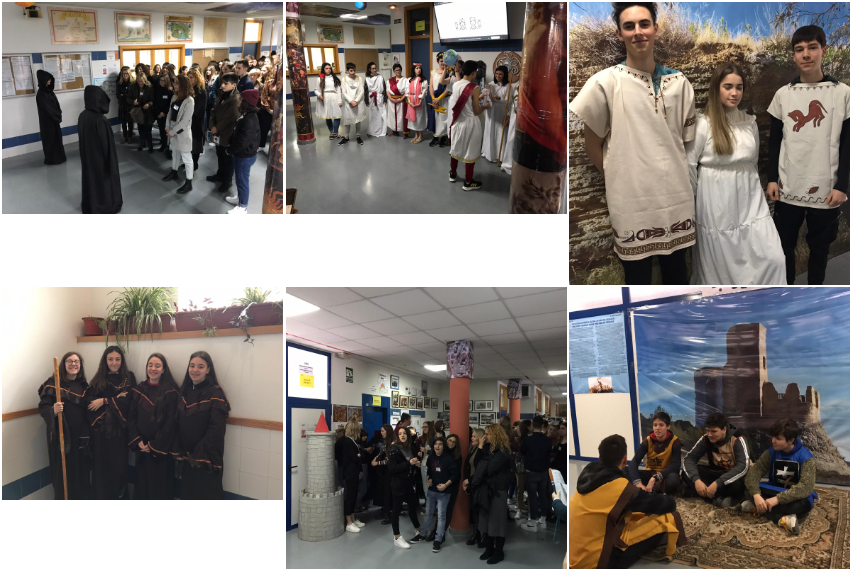 After receiving so much information, it was the moment of having a rest, so we proceeded to have a break, and recovered later with the icebreaking activities.

In a parallel way, in the Library a workshop about medieval caligraphy was taking place including students from the 1st year of Secondary Compulsory Studies, as part of the parallel program stablished by the school.

We also proceeded to present the other schools participating in the project. 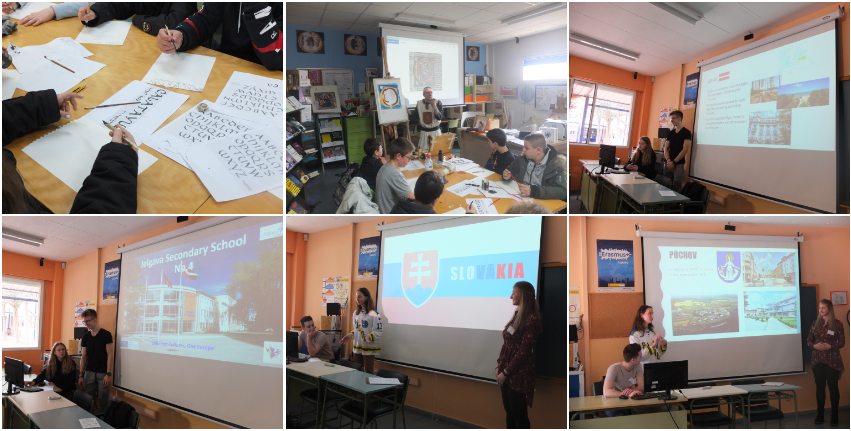 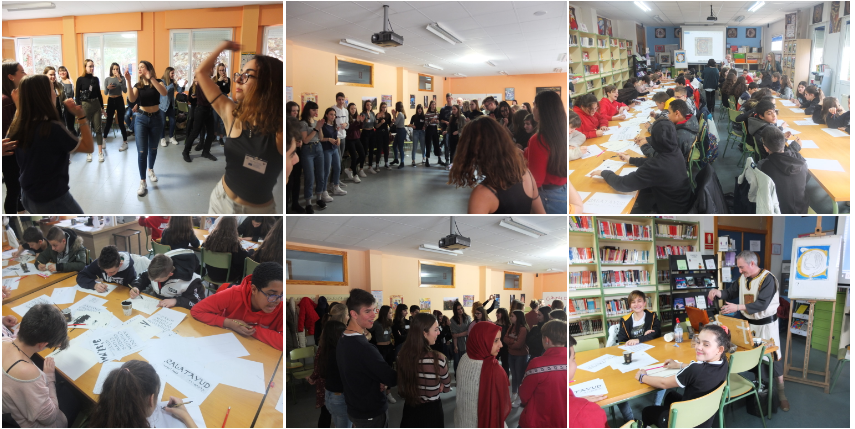 The day ended with the presentation of the activity “Evolution of Cities”.

In the afternoon, we visited Calatayud, knowing the more representative places from the town. The visit ended with a reception in the Townhall. 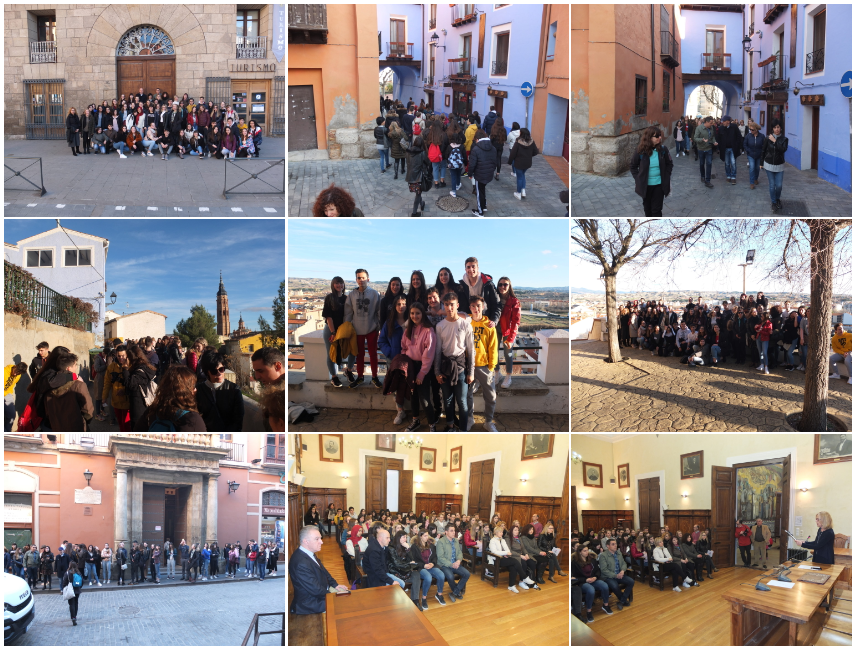 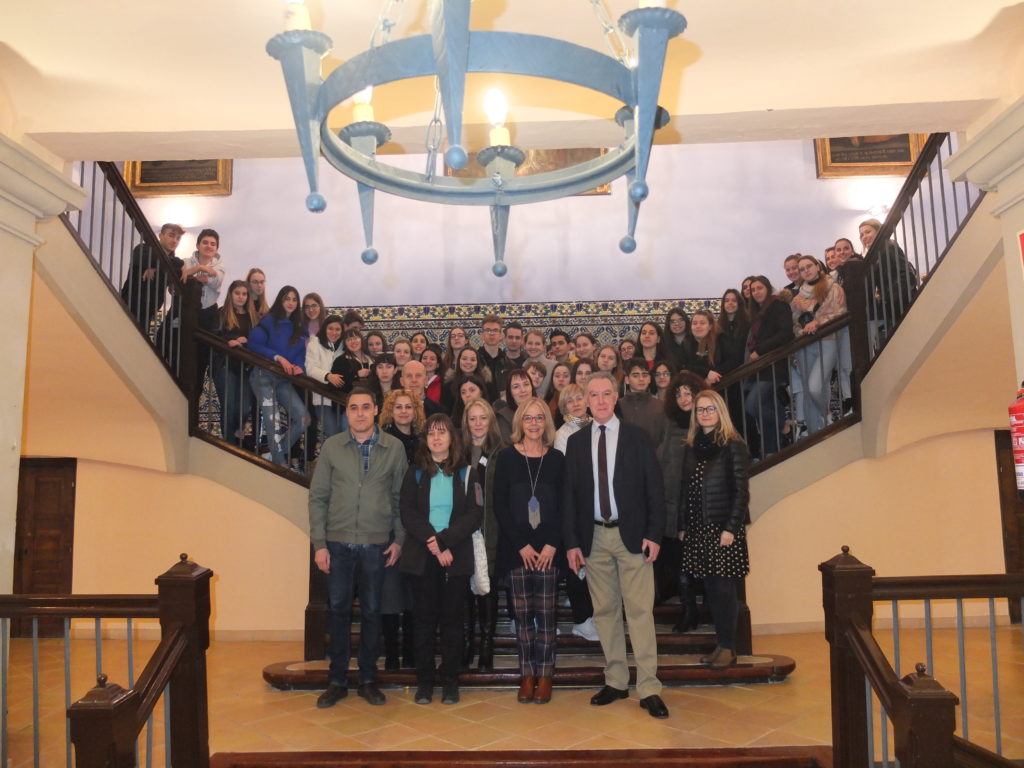 On Tuesday 11, we started with Spanish classes organized by a teacher from the school. She tough us basic greetings and how to speak about food in Spanish. With that, it will be easier to related in a better way with our hosting families.

After that, we proceeded to travel to Zaragoza, and we visited the Palace of Aljaferia. It is a muslom palace from the Middle Ages that later was occupied by Christina Kings and used as a residence by the Catholic King and Queen. Currently, it is the headquarter of the Gobernment of Aragon, and it embodies in an excellent way the sucession of cultures along the Centuries.

We walked to the centre following the route of the Sieges of Zaragoza, these places that were relevant in the sieges suffered twice by the city during the Spanish War of Independence. 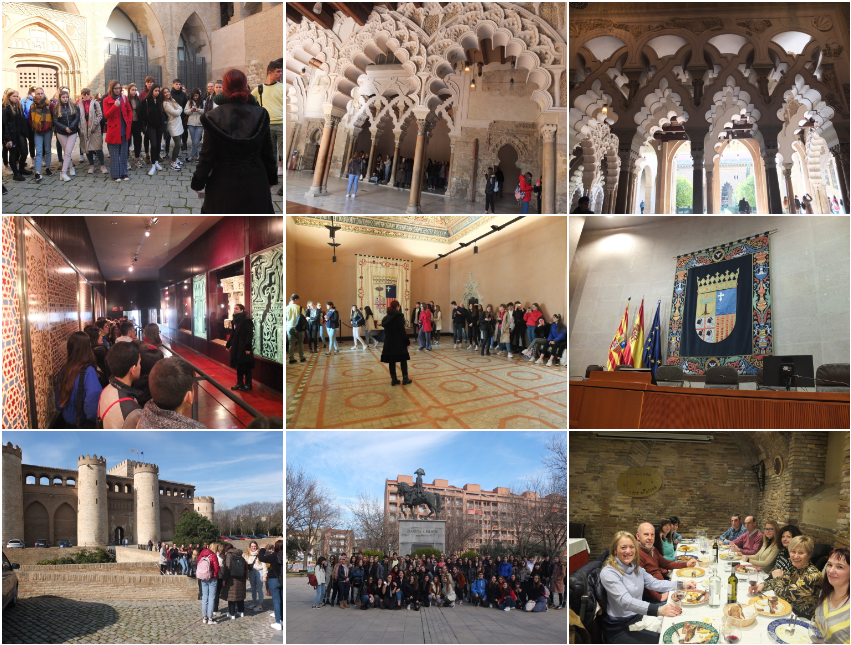 The parallel program continued at the school, this time with the students of the 2nd year of Secondary Compulsory Studies, taking part in a Workshop about Celtiberian dances. In the afternoon, the Square of the Cathedrals was visited, with the two Cathedrals of Zaragoza. After the visiti, the trip arrived to its end, and we went back to Calatayud.

On Wednesday 12, we started again with Spanish classes. We improved our vocabulary and the topics we were able to speak about with our hosting families.

In a parallel way, students from the 4th year of Secondary Compulsory Studies could participate in a Workshop about folding mudejar stars, a symbol of the interculturality in their country through the centuries.

It was the moment to follow placing in common the activities. This time, it was the activity about Literature and Progress in Science. 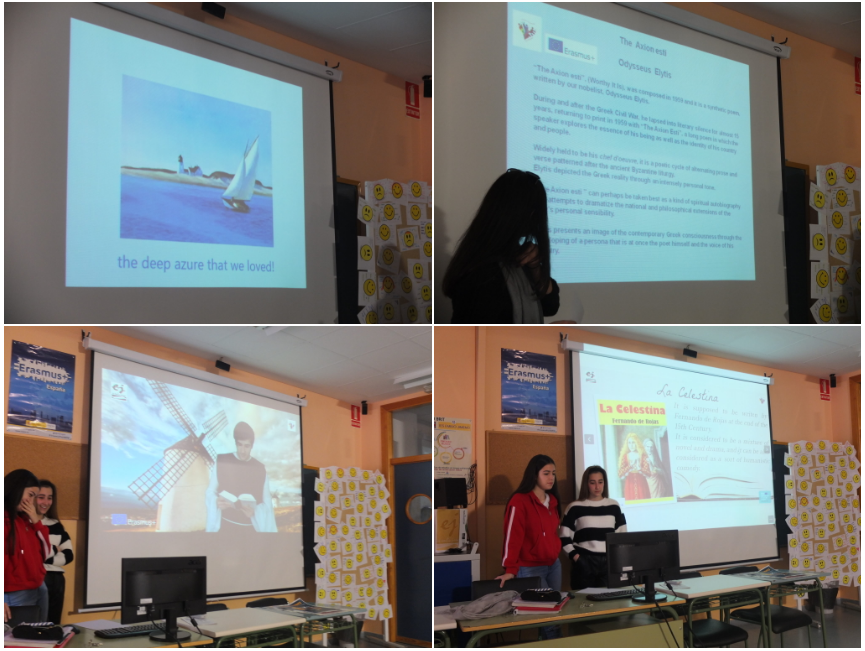 During the break, we also had a meeting with all the students involved in the theatralization of the Timiline during the first day. They received a formal invitation to participate in the closing ceremony on friday.

After the break, it was developed a workshop about folding a mudejar star, the same that previously had been done by students of the 4th year of Secondary Compulsory Studies in the parallel program.

Next step was the emission of a New Program about the War of the Balkans with the materials created and developped during the previous year ss by all the schools, and the performance of a later talk show about the treated topic.

Here we can see the later talk show:

After that, we proceeded to continue presenting some of the activities that were pending from the previous days.

In the afternoon, the students could participate in a Escape Room, while students exchanged learning experiences in a workshop for teachers:

On Thursday 13, the morning started again with Spanish classes, this time about Rosalia as topic. After receiving the last class, we went to Monasterio de Piedra, where we could spend the morning coexisting shile visited the gardens and the old Monastry. After that, we had lunch there. 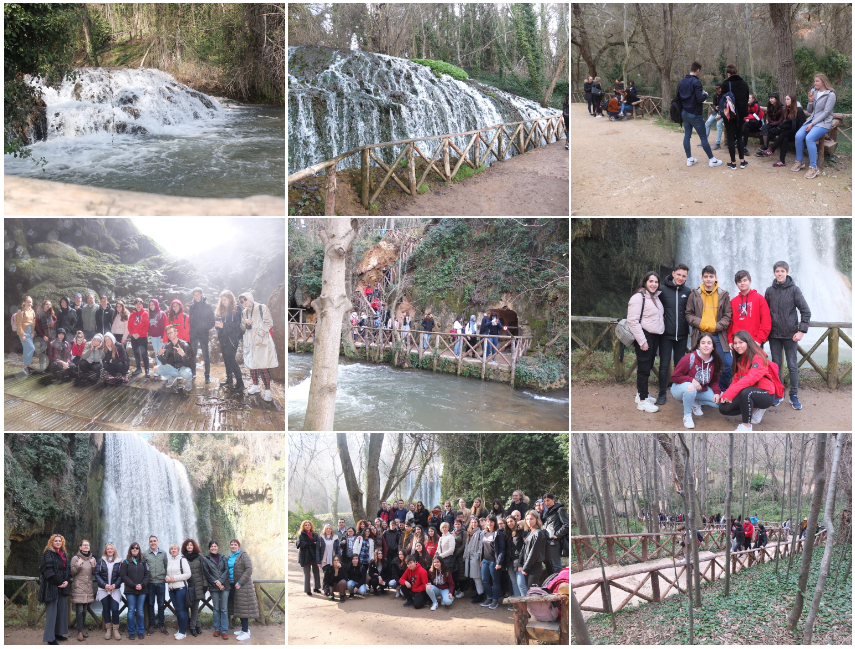 After coming back from the excursion, students could enjoy an afternoon with the hosting families.

On friday 14, it was the last day of the meeting. The morning started with the visit of both foreign teachers and students to normal classes at school. After that, we proceeded to present the last activities, exactly, important characters related to culture and science. 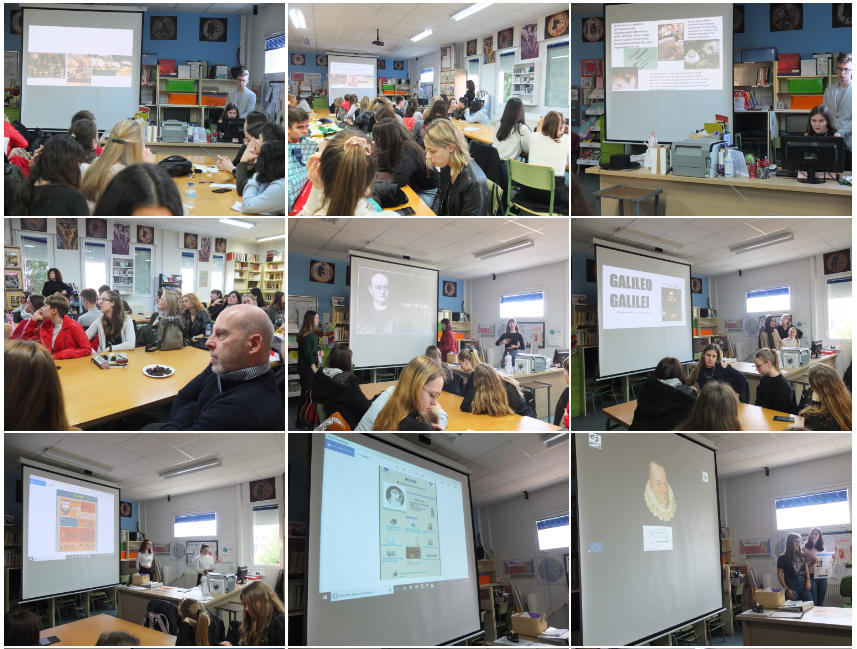 After ending the presentations, students could visit classes again, while teachers had a teachers meeting, organizing next meeting to take place in Italy at the end of march, and evaluating the meeting arriving to the end.

After that meeting, there was a closing ceremony, where all the students involved in the Timeline, and assisting teachers and students participated. The ceremony started in the Library, where the Myth of Prometeus, already treated in the inicial day of the meeting, was recoered. Prometheus stole fire from the gods and gave it to humans. This fire represents knowledge. The same way fire needs to be feed for not being consumed and light off, knowledge has also to be feed to give fruits. All of us have received this knoledge and we are responsible of feeding it and making it arrive to following generations, feed and augmented.

The same way as it happens with fire, plants need to be feed and water, to grow up and not die. This way, the plant placed in the Europe Square represented this knowledge. With this symbols, we ended the meeting in Calatayud. But, to be able to carry our legacy home and remember what we have learnt and lived, we gave a candle to each one, and turned it on, to represent this cultural legacy received. 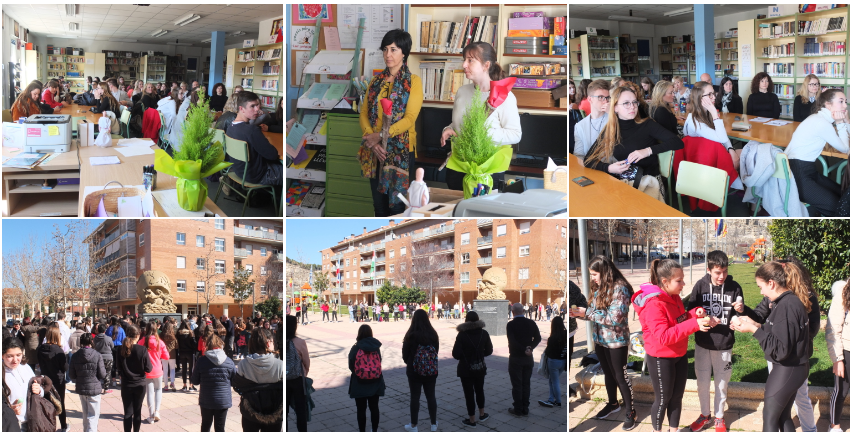 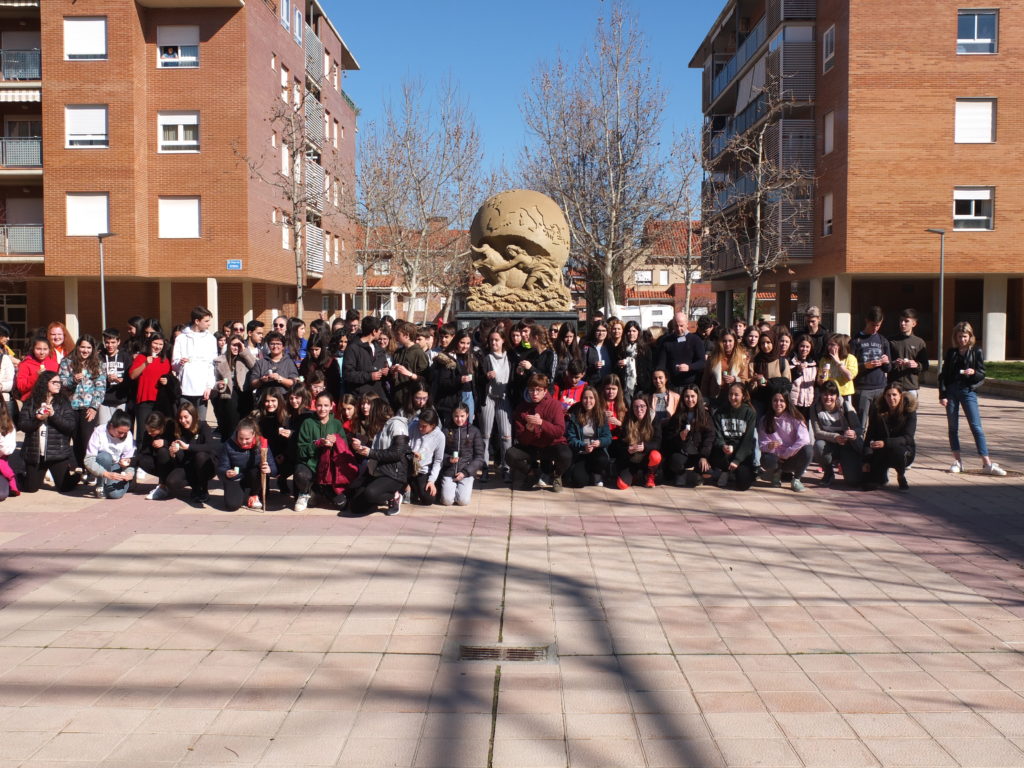 But we still had the good bye dinner, last event before the visitors going back home. On friday evening, after some voluntaires decorating the gym, we had a final event to say goodbye, where we could see the following video about all the process of the meeting:

And having some memories from it: 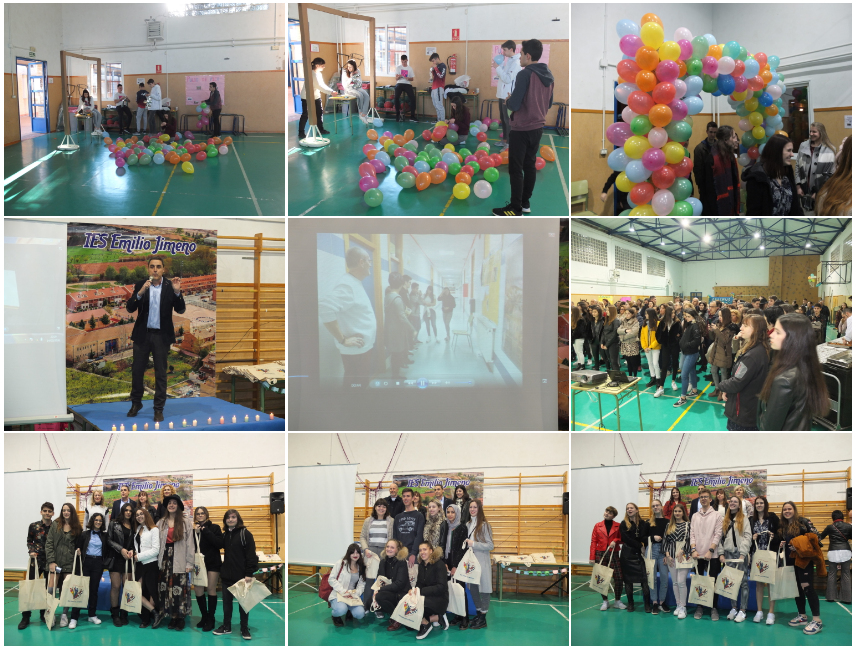 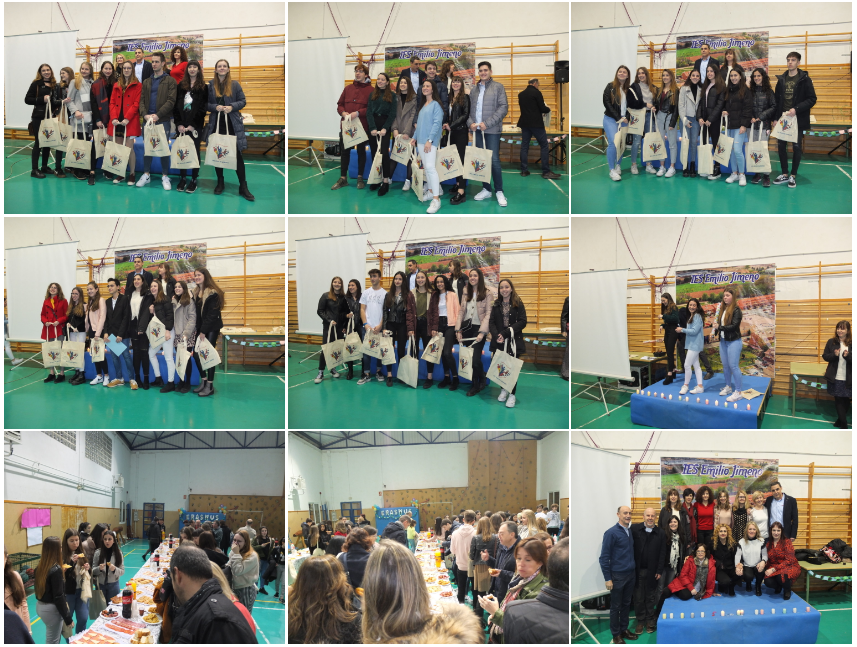 Though the saturday, different groups were travelling back home. We didn’t know it was the last time we were going to meet.